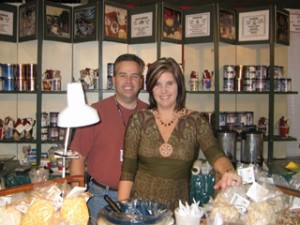 My story begins in the fall of 1988. At the time, my husband and I were a few years out of graduate school and living in the Washington D.C. area. Upon graduation, we were optimistic that our future, including our financial future, would be bright and prosperous. However, we were unprepared for the high cost of living in the DC area. That, along with our new student loan payment, and the usual expenses of a young family of 4 nearly put us under. To put it bluntly, we were dying financially! If we needed new tires for our car, or had to make a car insurance payment, it all went on the credit card. New furniture and new clothes were unheard of. After 7 years of marriage, we still couldn’t afford to go on a “date”. Instead, we had friends over to play games and enjoy a treat. Nothing wrong with that, until one time it all came to a head. Our friends wanted a drink of milk with the brownies we had offered them; they came into the kitchen and poured themselves one glass, then another glass, and another, until finally the whole gallon was gone. It wasn’t until they were gone, that I broke down in sobs, knowing we didn’t have enough money to purchase another gallon until the next week. Things had to change!

I desperately began trying to make money-at-home. I tried several different things, from network marketing to piano lessons, but never made more than $300 in any business adventure I pursued.

One day my father called and offered to buy airline tickets for the whole family to come home at Christmas. He said he had 2 new ideas that were so exciting they “kept him up at night” and he wanted to share those when we came home for Christmas. I begged him to tell me then, but he wouldn’t relent, saying I had to wait until Christmas.

Finally, upon arriving at my parents home, I dropped my suitcase in the doorway and said “TELL ME!”. My dad began in a very animated and rambling way, telling how he had hired a “life coach”, created a “Creed” and continued jabbering about how all of his goals were coming to fruition. I’m sure the blank stare on my face told him “I’m not getting this!!!” My only comment was “Dad, you’re too old to play sports!”. After rolling his eyes, he started from the beginning and told me how he had hired Leo Weidner, a former student of Napoleon Hill, author of Think and Grow Rich to be his “life coach”. Leo was assisting him in writing down all of his goals from all areas of his life in a method that I had never heard of before. (Remember, this was the 80’s! and affirmations were just on their way “in”.) This “creed” was a little like a personal mission statement but written in first person, present tense as if it had already happened! My dad went on to tell me that he had had an incredible experience so far and was accomplished his dreams much faster than he had anticipated. Still, I wasn’t really “getting” what he was saying, and so he resorted to handing me a booklet, that he said would explain it all!

His second “revelation” was a new business idea that a mutual friend had had much success with. When he mentioned this friend had made $30,000 in the month of November, I was all ears! It turned out the business was selling a “Wassail” mix (a hot orange, lemon and spice drink) at craft shows. The mix was packaged in a cute Christmas plaid bag, tied with a bow, gift card and cinnamon stick. They sold for about $5 each and my dad anticipated that I could sell hundreds. Then he made a powerful suggestion that kept me up all night. He said “Why don’t you take this business idea of selling wassail mixes, combine it with this new goal setting method and see what happens to you financially.”

Because I came from a goal-oriented family and New Years was quickly approaching, it was just natural that I would be setting my own 1989 goals very shortly. I decided that I would in fact “TRY” this new totally-off-the-wall Creed!

And so I began. I followed the details in the booklet, writing down my goals in each section of life (spiritual, physical, relationships, emotion, personal development and financial) “as if” I had already accomplished them. It was strange at first, but I quickly got the hang of it. When I got to the financial section, I wrote: “I have a wassail business! In November & December of 1989, I make $20,000. I do this by selling 2000 bags of wassail at 6 craft shows. Every Monday, Wednesday, and Friday, from 1-3 p.m. in the afternoon, I make the necessary phone calls and preparations to accomplish this task.” Interestingly, at the time I wrote this, I had no idea what was involved in having a “wassail-business”, because it was a brand-new idea to me.

After finishing up with the writing of my creed on a typewriter (no computer!), I was a little taken back that I was instructed in the booklet to record my written creed onto a cassette tape with Baroque music playing in the background! While still shaking my head at this crazy idea, I checked out Baroque music from the library, got our Fisher Price tape recorder and while my two little girls were playing in the other room, I began the task of recording my first-ever LifeVision! What a nightmare! I was almost finished with the entire recording and the phone rang (so the “ringing sound” was on my recording)….so I turned off the phone and started again. This time I was almost done when one daughter came into the room crying about how her sister had hit her. So I locked the door and started at the beginning once again. This time it was banging on the door about how the sister had hit her again…… all on my recording! It took me approximately 2 hours to record a short 10 minute recording! But finally I had my recorded creed on tape.

It wasn’t many days later that I began to doubt myself. I remember feelings like “Get real Ann, your husband only makes $25,000 and you think you’re going to make $20,000 in a single month! And besides….look at your track record!!!”These thoughts plagued me for a few days until finally I knew I had to change that single word in my creed from $20,000 to $5,000. But the thoughts of having to go through that nightmare for one word didn’t make sense. So I came up with the perfect solution! I would say “$5,000” over the top of my recording each and every time I listened to it. This was being “realistic” without the headache of having to re-record the entire thing. This worked for about 2 weeks.

One day I was driving to the grocery store, supposedly listening to my creed, but I got to the end of the tape and realized that I hadn’t paid any attention to it. I had been day-dreaming and hadn’t focuses on it at all! (I’m sure I was making a mental grocery list instead). I was discouraged and scared, wondering how this would all work if I couldn’t focus on my goals! I found my dad’s booklet and in the back was Leo Weidner’s phone number. I called him and said something like the following: “Hi Leo, you don’t know me from Adam, but my dad is a client, and on my own, I’ve written a creed. After listening to it for several weeks, I’m having trouble focusing and usually become distracted while listening. Do you have any suggestions?”

Leo asked me if I had followed the instruction of recording it to Baroque music in the background. I said that I had. He said…”Good, it doesn’t matter if you’re focusing or not because the super-learning music helps to take it to the subconscious by putting you in the meditative state of Alpha.” (WAY too deep for me!) He assured me that it would work even if I daydreamed! PHEW!

Needless to say, it wasn’t too many days before I stopped saying “$5000” over my $20,000 recorded goal. I continued to listen to my recording daily (at least subconsciously J) for the next 10 months and crazily enough, I made $19,800 in the month of November !!!! Can I just say how thankful I am that I was too lazy to re-record my creed (thereafter to be called a LifeVision).

After this experience, I had to ask myself… “Why did this happen? “What made it work”? I will admit that I didn’t spend the time researching the answer to these questions and the principles behind them. I was just thrilled it had worked and so I spent my time creating bigger and more powerful LifeVisions. I knew it worked, and I wasn’t too concerned at the time of “Why” it worked. The results were enough for me.

The next season, with a year’s experience under my belt, I was determined to create a much bigger business out of my little “Wassail business”. I began the year by creating a new LifeVision that included the financial figure of $100,000. (My husband Scott wanted me to “just add another zero, to the end of last years number”…but $200,000 was a little ambitious for a girl who was still reeling from the $20,000 experience.) Once again, I listened daily to the affirmation of $100,000~ 15,000+bags of wassail to back up that figure. But the Universe had other plans…we got into the wholesale business which threw that figure into the tens of thousands of bags! We became a staple at the Gift Markets and Gourmet Food Shows, selling to over 2,000 stores nationwide. Wow! A simple idea that eventually became a million-dollar idea for our family. Now, 17 years later, we still own and run Old World Specialties, maker of fine gourmet food mixes.